April 15, 2017 – Being a shipgeek and lover of the liners of yore, I’ve made enough online acquaintances with fellow travelers so that today’s Facebook and Twitter feeds are awash with the annual explosion of Titanic tributes. I believe those of us with even the mildest case of OLOCD (Ocean Liner Obsessive Compulsive Order) go through this phase at some point in the adolescence of our affliction. Depending on age, the fascination can probably be attributed to Walter Lord’s definitive A Night to Remember (either the book or its British film adaptation), or any of the subsequent retellings in various forms (the 20th Century Fox 1952 Barbara Stanwyck vehicle Titanic being a personal favorite), and, of course, the influx of newbie afficiandos who were indoctrinated by the eponymously titled film by James Cameron back in the Twilight of the last century and millennium. (I capitalize and italicize “twilight” for a reason I’ll leave you to ponder.)

Personally, I’m in the group who caught the bug in the mid-1980s when I happened to see the compelling, respectful, and poignant National Geographic documentary about Dr. Robert Ballard’s discovery of the wreck. I’m not sure if “inspired” is the right word, but I was subsequently moved to co-write a screenplay with my friend Dudley Sanders entitled Dead Reckoning. It was a hybrid historical drama/action-adventure film, and while the script was universally praised by the studios that considered it in 1988, they all declined to move forward for the same reasons: “this would be the most expensive movie ever made, and nobody wants to see a film about the Titanic.” The conventional stupidity of the time was that there was no point in telling a story whose ending everyone already knows. *Ahem.* Tell that to Mr. Cameron.

Outcome aside, Dudley and I prided ourselves on our research, including Lord’s first book and its follow-up, The Night Lives On. We ordered deck plans through the mail (in those quaint pre-internet days), and took no creative license other than having the ship’s quartermaster confine an unruly passenger to the dog kennel because we could find no reference to any brig-like space aboard the vessel. I even assembled and painted a model of the ship so that we could more easily choreograph our characters’ footsteps as the ship gradually submerged.

The 20th Century Fox script reader singled out the thoroughness of our research and apparent affection/reverence for the subject matter as a way of cushioning the rejection. Had our film actually been made, it would have been the first to prominently feature the ship breaking in two as she went down. In the end, suffice to say a few year’s work and passion has since been relegated to a blog post.

The story of the ill-fated ship and her unsuspecting passengers nevertheless worked its way deep into my psyche to the point that I joined the Titanic Historical Society, attended one of their conventions aboard the RMS Queen Mary in Long Beach, and even came to believe that I was spiritually connected to the doomed vessel because I had perished aboard her in a previous life—the latter being mercifully short-lived but as I’ve come to realize not uncommon in Titanic folk (though I will admit to a lingering and prevalent fear of drowning in frigid water).

All of this began to change with the arrival of the aforementioned Cameron film. My husband and I attended the west coast world premiere at Grauman’s Chinese Theater, and I lost count of the number of times I cringed at the fictional plot points and dialog, all while being mesmerized by the respectful attention to detail. At the after party, I stood for a long time just staring at one of the mammoth models that had been used in the production, and couldn’t make up my mind if I had really disliked the film or if that bitter taste in my mouth was sour grapes. That it was the former began to clarify for me when our geek-intensive internet message boards were overrun with queries about Jack and Rose and insistences that despite what that Walter Lord guy wrote based on first hand accounts from actual survivors, “Nearer My God To Thee” was absolutely played by Wallace Hartley and his fabled band as the ship ducked below the surface. There were also intense debates about whether or not Kate had enough room on her ornate flotsam to save Leo from a watery grave. As a result, the horrific poignancy of the underlying facts were overshadowed by the insipid moustache-twirling melodrama of Cameron’s fiction. The wild success of the movie (which I still maintain is a pretty dreadful Harlequin romance novel set against a backdrop of mostly meticulous historical accuracy) coupled with the news that despite Ballard’s wishes, the wreck of the actual ship was being pillaged and the macabre loot put on traveling display (and secretly sold to deep-pocketed, well-connected collectors), fed the curdling feeling in my stomach. Throw in the rushed-to-preemptively-caplitalize-on-the-upcoming-ballyhoo’s execrable 1996 CBS miniseries, and I was done. I know it sounds ridiculous, but I felt as if something precious had been usurped, exploited, and commercialized. (Hypocritically, I’ve given a pass to Peter Stone and Maury Yeston’s brilliant Broadway musical that premiered around the same time, which only muddies my so-called “moral high ground” and shows I’m fully guilty and capable of a double standard.)

My feelings about the Titanic are complicated, especially around this time of year when they once again bubble upwards and break through the surface gasping for air. My interest in ships moved on to more successful vessels like the SS United States, and my eyes now roll at each post and tweet commemorating the Titanic as the “greatest” and/or “grandest” ship ever built—neither claim being based in reality. A “great” ship doesn’t founder the very first time she sets out to accomplish the one job for which she was designed, and subsequent liners, such as Britain’s Queen Mary and France’s Normandie, certainly surpassed the rather dowdy Edwardian Titanic in grandeur.

The sobering reality that’s grounded somewhere in all the noise is that an unthinkable tragedy occurred the night of April 14-15, 1912, and hundreds of innocents needlessly perished as the result of corporate neglect, greed, and the hubris of humankind. It is a story that deserves the respect of repetition and the memorialization of all of those whose lives were senselessly ended or forever altered by its horrific events. To that end, I’ve now come full circle: I may no longer believe myself to be the reincarnation of some tuxedoed gentlemen who perished that awful night with my dignity intact, but I’ve come around to the belief that as long as her story is told with respect to those lost or damaged souls, keeping alive both the memory and the moral of the Titanic‘s story is our sacred obligation to each and every generation. * 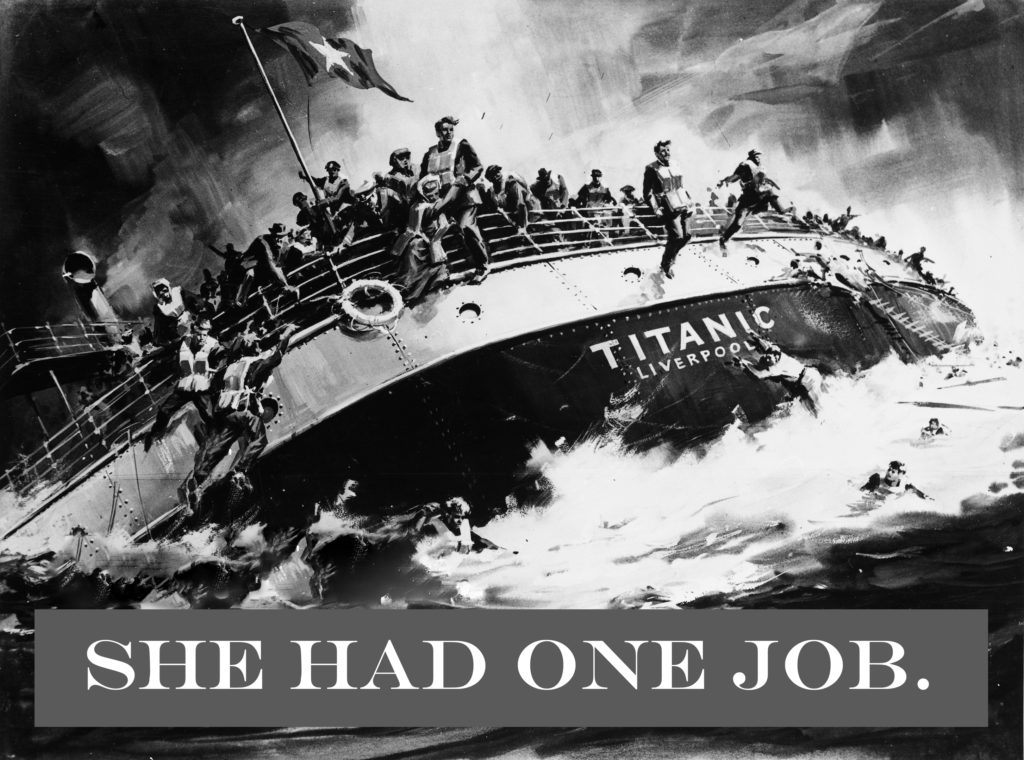 *With, of course, the exception of that vile and damnable CBS miniseries.